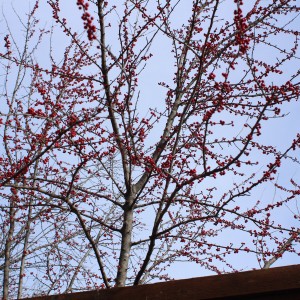 By and large the people we interact with on a daily basis are living reactionary lives. They are responding to stimuli without thinking about where the stimuli came from. Most often I see people reacting to the emotional parts of their lives as though those emotions demonstrate absolute truth. I am sure you have witnessed this in your own life. Perhaps you have a friend who verges on paranoid and tells you stories about how everyone at work is out to get her. Or maybe you know a guy who projects his insecurities onto his partner, causing arguments, which leads to his partners attention being solely on him. This sort of thing is not uncommon but it is incredibly destructive. This behavior comes from our lack of consciousness and understanding surrounding our very self. By and large the consensus tends to be that our thoughts cause our emotions which then influence our actions. I am here this week to challenge that idea. I postulate that emotions happen first, long before our rational mind can organize thoughts. I suggest that because we relegate emotions to the realm of illogical we try to subdue their effect and by doing this we are out of balance. To correct the imbalance we become masters of justification, we wrap thoughts around our emotions and present them to the world as truths. This week I want to share how this is happening and some ways to combat over-thinking.

Someone asked me recently if the goal of mindfulness and awareness was to silence all emotions and be disconnected from responses. I am a combination of amused and horrified by that idea. Often it is more complicated than that, mindfulness first tackles the mind. It wiggles into that part of you that worries, makes lists and over thinks. This is why when we begin addressing inner work to be done that people tend to panic. Who you perceive yourself to be is all wrapped up in your thoughts. The ego is is something that lives deep in the psyche, below thoughts and rationality. Ego lives just underneath our emotions, so an emotional response if often the first way we can react to something. Ego is an old world defense system tied to our limbic system that tells us when we are in danger. But we have become higher level mammals who operate machinery and aren’t afraid of the dark anymore, we no longer recognize the voice of the ego for what it is. Instead we use our prefrontal cortex to invert a story, a WHY behind our phobias, desires and pet peeves.

All of this becomes very complicated when one comes to a point in their life where they want to sort out some of the unproductive habits and beliefs they have created. We are told over and over that to change how we feel we must first change the way we think. The trouble comes when no one provides a second step and people get stuck in a cycle of thought vs emotion. The thing is the mental world is not meant to overpower emotional or intuitive world nor the other way around. Those two are part of the same phenomenon, they are the way your body and mind communicate to you.  If you stifle one you are out of balance. If you are cut off from your body awareness then working with your head is the only place to start. This is because, your thoughts may be the only area you really have awareness of. You can’t work with something that you cannot see, so people often find it easiest to begin with changing thoughts to shift behavior in a more productive direction.

This does not mean that all emotions are true and all our thoughts false. Both are creations. They are part of an inner world we are creating. Sometimes, they are very accurate. Other times they are things we picked up from other people. The purpose here is not to swing into imbalance in the other direction but the bring our focus to the idea that they are the same thing experienced in a different language. So what is the next step then? I suggest we have to give ourselves a safe space to practice and learn to work with the intuitive and emotional worlds. The body and mind are connected and are communicating with you constantly, so your challenge this week if to find out how. What senses do you normally process information through? Do you lean more toward visual and kinesthetic? Are you really in touch with how thoughts feel in the body? Notice how you conventionally process the world around you and then experiment with using other senses that are not so conventional to you to experience stimuli. Remove the expectation that emotions will conform to your thoughts about reality or your view of self. They are different languages, one cannot expect them to use the same syntax or grammar. So when you allow your emotional world to have it’s own space to exist without living them labels of thoughts to wear, I am curious what kind of things come up for you? How is this different from your normal way of processing and functioning? By bringing your awareness to the differences between thought and feeling, what do you begin to notice about your behavior? 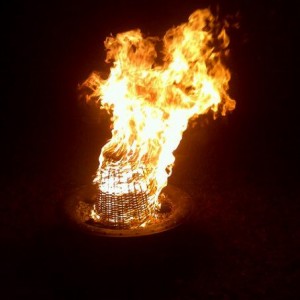 This is the first installment of my combination series of Unspoken Locus. The idea behind this tile is that there are places we do not talk about, and I want to talk about it. Unspoken Locus was motivated by a rejection letter I received from a publisher who enjoyed what I wrote but they actively stayed away from topics of sexuality. So here I want to share with you all the things we aren’t supposed to communicate about to our partners, to our self and to our culture around us. This is a broad subject and will probably reach into sexuality, society and the realms of self. The topics presented here are probably a little not safe for work. My goal is to present that which we do not talk about with awareness and mindfulness and see where we wind up. The second goal is to shine the light of humor on these ideas. I want to disenfranchise the hidden ideas and that which isn’t polite and bring about a more open conversation.

I have a vivid memory of this moment in my teen years in which my basketball team mates were discussing sex. Now there is nothing strange about teenage girls talking about sex. In fact that is kind of standard of high school experience; talking about sex with people who often know next to nothing. Misinformation was everywhere. Given that I grew up in rural North East Texas whose idea of sex education was akin to the scene with Coach Carr in “Mean Girls”.
“Don’t have sex. Because you will get pregnant. And Die!”-there was not a lot of accurate free flowing information. 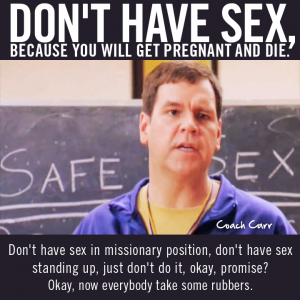 Several sex-negative speakers had recently made the rounds at assemblies, talking at length about the dangers of having sex, pornography and STD’s. They also seemed to be really fond of suggesting that women be quiet and follow the lead of their (equally clueless ) boyfriends because one that will be similar to how their future household will function. Awesome…Follow the lead is the sex ed we give to women. At least it was where I grew up. (One of these speakers, Justin Lookadoo, is famous for his message of “’Dateable Girls Know How to Shut Up’, was recently arrested for public intoxication by the way.) There was no sex-education program to speak up, though there was a health class which consisted mostly of showing us pictures of late stage syphilis and outbreaks of herpes. The point is, it was 2004 and we were all clueless. Adults seemed content to dodge the issue with abstinence only education and despite all of that it seemed that everyone my age was having sex. Or at least claiming they were. In this particular locker-room conversation we were listening to our point-guard describe sex with her boyfriend who was about three years older than we were. Tantalizing. I do not remember the entire conversation but there is one part of it which remains with me to this day. Our friend was describing going down on her boyfriend, tastes, smells, all of that wonderful stuff. And another girl asked her if he ever returned the favor and went down on her. “No! Of course not. He would never do that, he says it’s gross. And it makes men gay.”

Suddenly in that one sentence I discovered the first seeds of doubt which would later grow into a forest of skepticism. Even at fourteen that seemed like a really backward and bigoted thought to express. I do not remember asking her anything about this mindset, but I still think about it. Where did such an idea come from? Where was it born? Did he tell her outright that performing oral sex on women was gross? Was it simply a preference of his? Or was it just more misinformation he had picked up from his peers? Or was his distaste for the activity seen in actions, an avoidance of the subject that convinced her that her own body was some how gross? I know I encountered this same sort of sentiment not long after this with my first partners. The idea that “I don’t go down on girls” was a perfectly acceptable and even admirable thing for men to to say was prevalent. I know now this is something that people who are not really my cup of tea say and I am not going to dive into the partisan nonsense of that mindset. We shall leave that for another article. No one should feel pressure to perform sexual activities they do not enjoy. Everyone has their preferences, and I am not here to shame anyone. But the entire concept seemed so weirdly biased as well as set in stone. For some thing we were not supposed to talk about there certainly were a lot of goofy rules.

My goal here is not to take on the establishment, or bash small town education, I cannot command parents to talk to their children about sex, I cannot make conservative public school stop hiring sex negative speakers to strike fear into the minds of teenagers. My goal here is to approach this topic with awareness. And ask a very important question; where is the love? And why is self love still so taboo? I say we start a self love revolution! I say that instead of burning bras we spend some time loving ourselves! How can another person truly satisfy us if we have no idea how to satisfy the self? The answer to that last question by the way is: they can’t. The human body is a beautiful, complicated Rubik’s cube and lack of sex positivity only makes it more difficult to begin to enjoy someone else. So I challenge you this week, go enjoy your partners! Go enjoy yourself!

I still wonder about that point guard at times. I know she is a beautiful young lady with a son and all that. But mostly I wonder if she still perceives that awesome act of reciprocating oral sex to someone you think is awesome to be unacceptable?